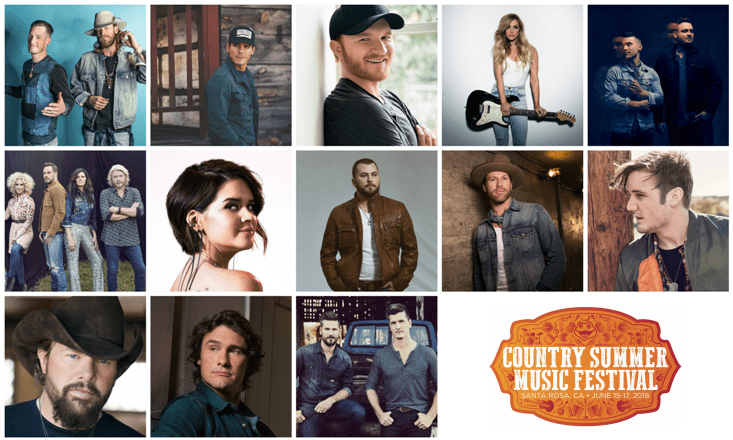 Performers on the Chevy Silverado Main Stage were announced this morning on Rob & Joss in The Morning on Froggy 92.9, a partner in the event.

In between performances on the main stage, popular bands from the local area will keep fans entertained on the Redwood Credit Union Community Stage.

While great music is the main attraction, Country Summer also features shopping, experiential activities, a variety of culinary delights and an array of libations — from Anheuser-Busch beverages for beer drinkers, to wine and spirits at the Kendall-Jackson Wine Garden and Jack Daniel’s Saloon.

The Country Summer Country Club, introduced and sold out in 2017, is a members-only, indoor VIP destination featuring a complimentary buffet style meal, a honky-tonk cash bar, games and activities, private restrooms and a break from the California sun.

There’ll be live video on big screens and audio streaming from the Chevy Silverado Stage this year. Membership is limited to 350 guests each day.

In the past four years, Country Summer has evolved into a colossal destination country music event, attracting concert-goers from across the nation and four countries. New this year is the Country Summer Campground, in addition to the RV Park. Camping passes and packages include access to the Camper’s Lounge and Country Summer After Party, starring Dee Jay Silver, 10 p.m. to 1 a.m. on Friday and Saturday. Country Summer gates open at noon, and music begins at 1 p.m. each day of the festival.